An increasingly popular ski tour in the Icefields Parkway that provides beautiful scenery of surrounding peaks and lakes, alpine and pillow skiing, and roughly 600m of descent. The approach is less than ideal and involves a river crossing, mild bushwhacking, and limited ways to truly reduce overhead exposure. Gaining the shoulder offers steeper fall lines and access to a large alpine bowl below Pulpit Ridge. Views of Mount Hector, Dolomite Shoulder, and Watermelon Ridge can be enjoyed on the uptrack and descent.

Heading west on the Trans-Canada highway, take the turnoff towards the Icefields Parkway north for approximately 13.9km and park on the side of the road across from Mount Hector. The trail starts with a descent into tight trees (prepare yourself fellow split skiiers) before flattening out.

Continue west-southwest for 700m before a clearing opens up with views of Pulpit Knobs 3, 4, and 5. After 1.2km, you will reach a river crossing - other resources have indicated that it often remains frozen into April. Continue choosing the path of least resistance through thick trees in a relatively straight line until you exit at the base of a slide path. Use the trees on climbers right to gain another 120m before cutting across to gain the bench.

From there, continue heading climbers left to gain a second bench before following the shoulder towards the a wide flat bench overlooking the valley taking care when crossing the main slide path. The pitch above this is steeper and makes for great skiing. You are then able to continue left before wrapping around towards some trees before gaining the ridge. From there, choose from multiple descents depending on the stability of the snowpack.

After an amazing day prior at Teddy Bear Glades, we were tempted to squeeze in one more day amongst the old growth before heading home. With increasingly poor road conditions through Roger's Pass and numerous reported slides and instabilities in Yoho, we settled on checking off a route that's had my eye in the Icefields Parkway. Out of the 6 possible knobs, I had previously heard the fourth offered the best skiing. We had originally set out for the third knob but changed our objective after we saw the overhead exposure above the approach for knob 3.

After a couple wet storming days in British Columbia, the clear skies and scenery were a sight for sore eyes despite the chilly -22C start. As someone who runs on the hotter side, I was looking forward to a cooler dryer day with more photo opportunities.

This was the last leg of my first ski touring trip and I was admittedly on my last legs. After receiving the exciting invitation to join, I immediately began a training regimen of eccentric legwork to better keep up with the two ultramarathon runners who organized the trip. I am happy to report that while the squats and lunges were successful in keeping the motors rolling (and more playful when riding), I woefully underestimated the cardiovascular component and accepted my fate as a brightly coloured slug.

Our attempt to follow a drainage on the right towards the third knob failed as we popped out at the bottom of the slide path between the third and fourth knobs. From here, it was unclear how to proceed towards our original objective. We decided to stick near the trees and gain a bench or two up the slide path in hopes of scoping out a better approach. Along the way, we noticed the appetizing fall line with plenty of pillows on looker's left. We decided to avoid the overhead hazard over the gully and gain the ridge towards knob 4 instead.

My first time truly spending time in the Icefields Parkway was during the previous season on the way up Puzzle Ramp. I adored the towering white walls of Dolomite Ridge and today was no different. The tips of the headwall glowed in the morning sun while Mount Hector and Hector south appeared increasingly radiant towards noon. A welcome change from the bleak grey of the days prior.

In retrospect I'm angry with myself that in my hurry to transition I forgot to take a picture of the alpine bowl immediately left or the headwall to the right, but we were excited to ski our first pitch back down towards the bench. Our plans for a quick alpine picnic fell through as the cold hit Ben and Margaret. The morning's muffin was now long gone to the tune of endless gurgling from my stomach as I carried forth on caffeine and chocolate. A rounded breakfast, even if it's terrible prepackaged chinese food from Save-On Foods makes all the difference.

None of us had particularly high expectations for the snow that day but we were pleasantly surprised with a blower 50cm on top. Coming off the ridge, staying to skiier's left provided access to a slightly steeper pitch on a concave slope. Skiier's right was more open and mellow but positioned you nicely for the second pitch.

We took the steeper pitch in turns and enjoyed face shots on the way down. With a wider angle lens aiming skiiers right, you might be able to squeeze the valley in but the concavity of the pitch makes it difficult to frame an interesting background.

After wrapping around the bench, we began traversing towards the fall line we were eyeing earlier. As we traversed towards the east aspect the snow underfoot became more variable, likely the result of some wind effect through the valley. Weaving through a few younger trees, Margaret enjoyed her turns in front of Hector Lake and Dolomite Shoulder.

At the mercy of YouTube's algorithms, a drip feed of pillow lines had invaded my daily life and nurtured a burning curiosity to try dropping a few of my first pillows. Watching your nose emerge from the powder momentarily before flying through the air and snorkeling towards the next one was nothing short of addictive.

Shooting tighter towards the rider or uphill (maybe from below?) likely yields the most interesting angles. A small section of larger pillows further up may provide a chance to include the valley in the background.

Despite vague expectations, this ended up being a lovely way to cap off the trip. With a playground of exciting features to ski in front of amazing scenery, I definitely see myself returning again in the future. 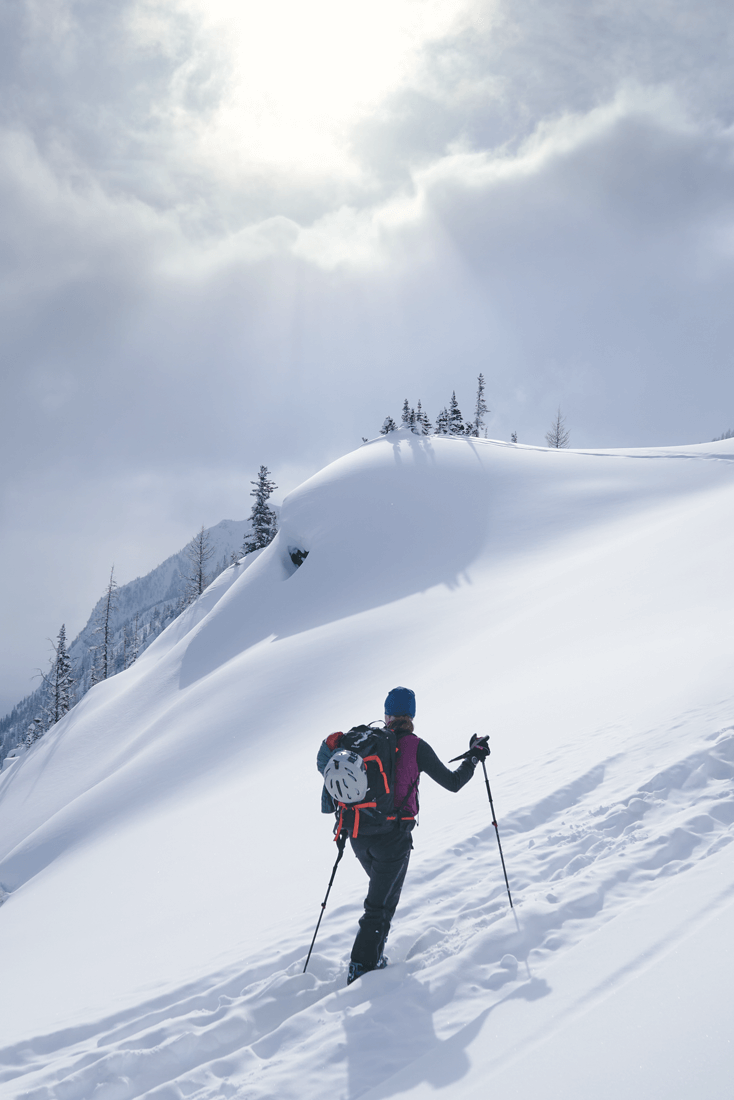 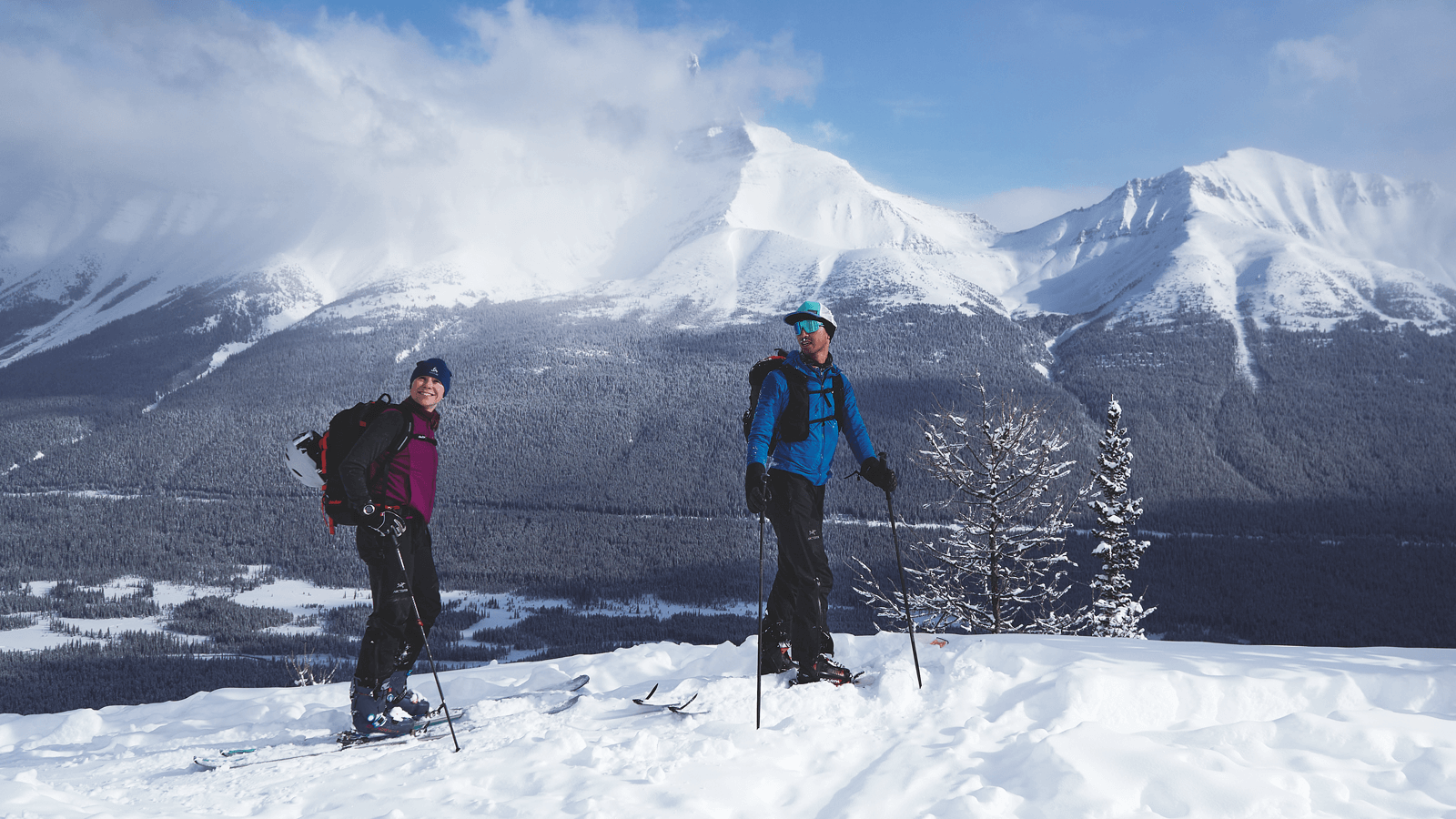 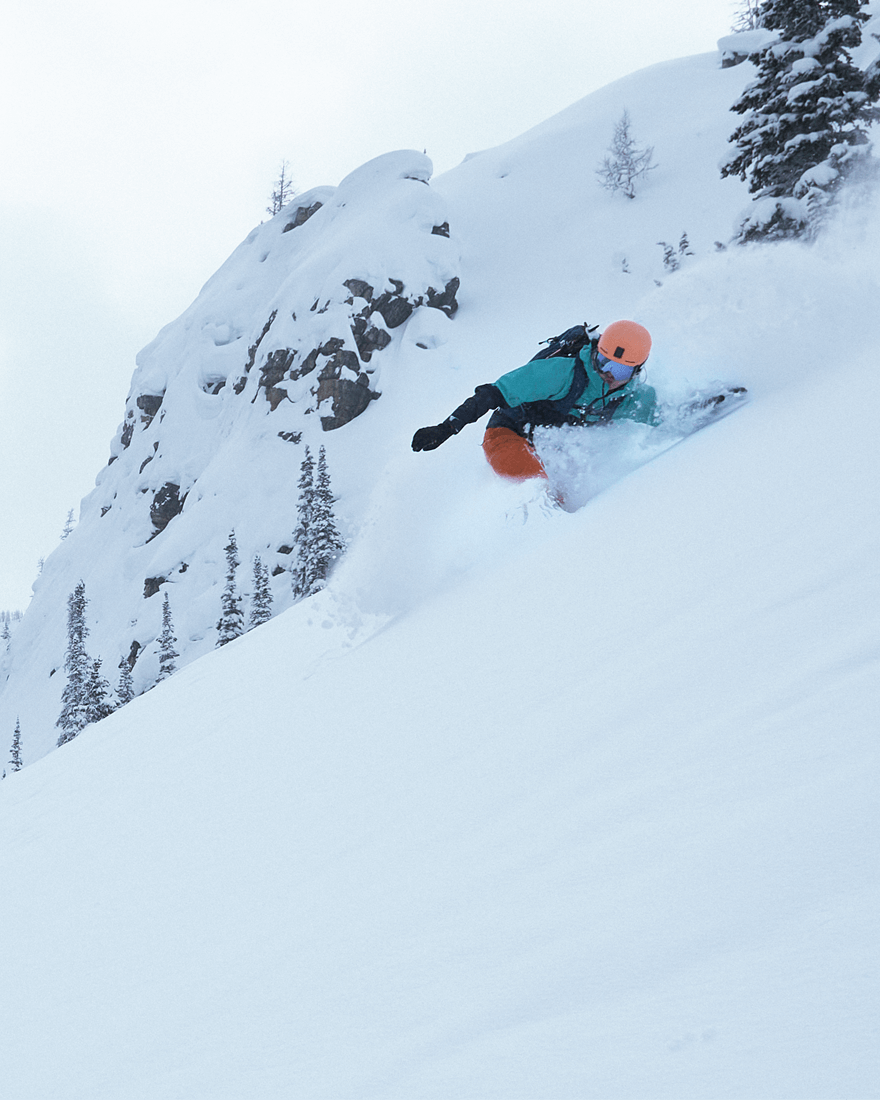 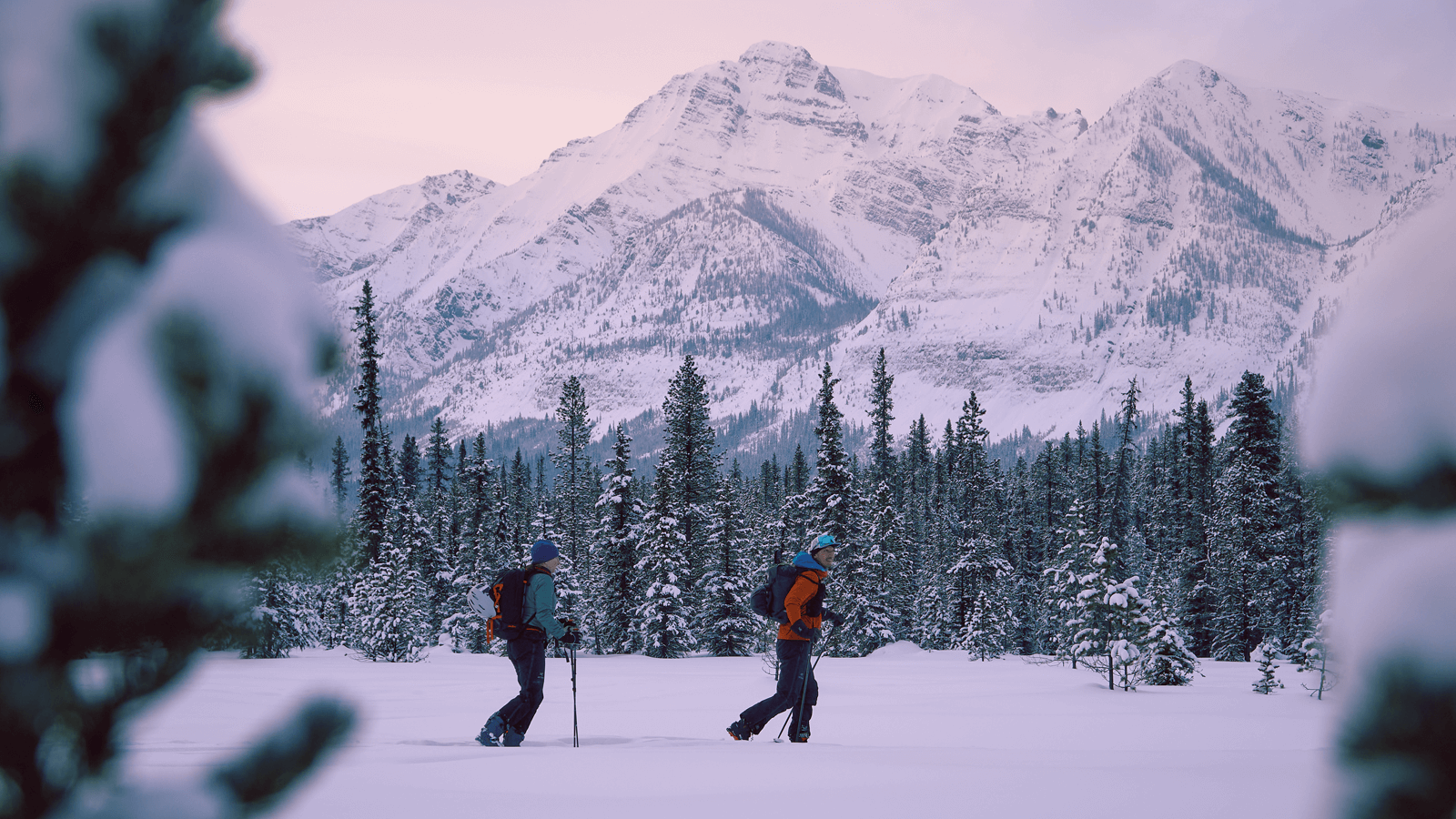 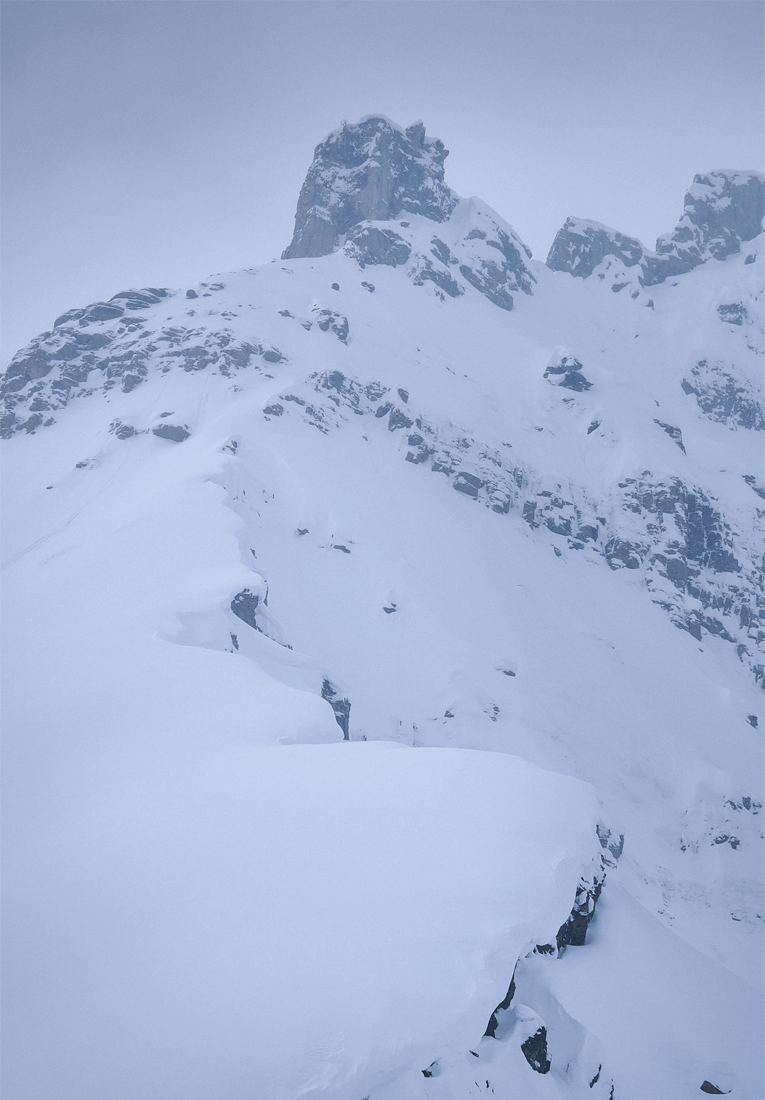 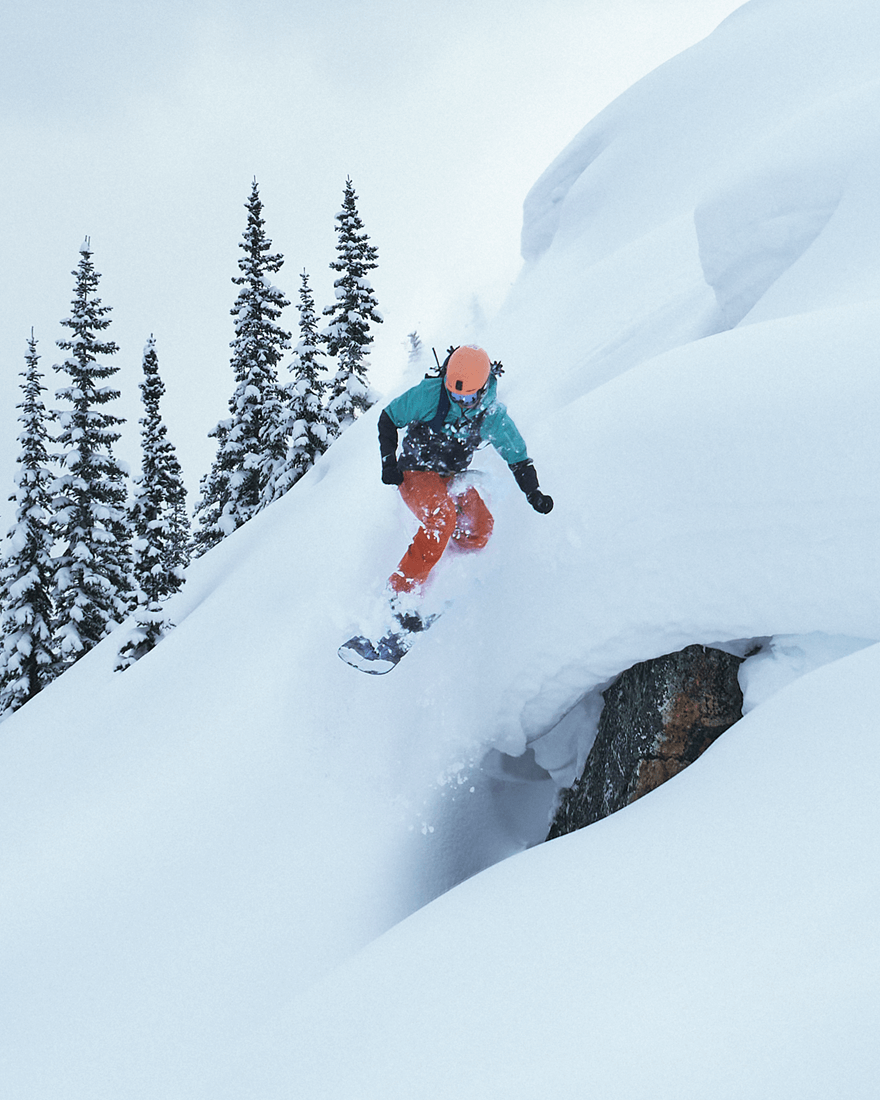 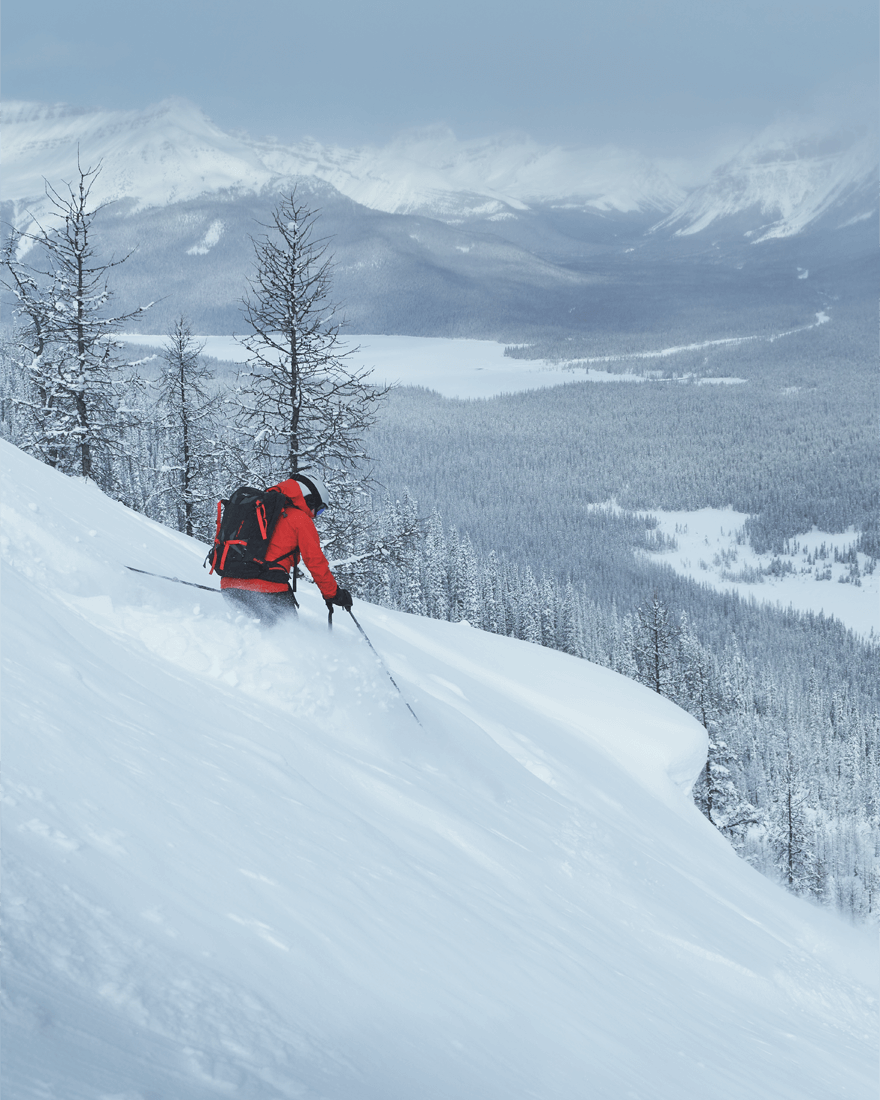