Oxo/Puzzle peak ramp was the site of a large rock slide in November of 2018 leaving a semi-circular rock formation at the top of the ramp earning it's nickname Watermelon Ridge. The ramp offers great low-angle fall-line skiing down 300m of elevation and is wide enough to provide multiple laps of fresh lines, even on busier days. The main source of exposure comes from the east aspect of Dolomite shoulder that has a history of being reactive but can be avoided by staying to the right and continuing over the creek straight forwards the ramp over lightly treed hills.

Park roughly 1 kilometer north of the Mosquito Creek Campground by the wider clearing through the trees. The trail starts with a well packed skin track with a mellow incline that follows undulating terrain through thick trees.

After approximately 2.4km the trail will become wider until you reach the clearing at the base of Dolomite Shoulder (approximately 3km from the trailhead). Continue on the trail until you reach a more open area. From here, you can either stay left along a gully or cross a creek to the right. Go left to head towards the west side of the ramp with slightly steeper riding being mindful of the overhead exposure from the east aspect of Dolomite Shoulder. Go right across a small creek and up through some thinly treed hills until the ramp comes into view. From there, most groups ascend the right side and ski down the center of the ramp. When returning, it's helpful to keep the skins on until you reach the clearing at the bottom of Dolomite Shoulder again at which point you can ride back to the parking area.

An Amazing Start to the Season

The day began with numb fingers and frosty breathe crystallizing on Alyson's hair thermometer reminding us to check the temperature more diligently on our next outing. Fortunately within 30 minutes the all too familiar needle-like feeling of warm blood came rushing back to our fingertips and revived our hands. We found ourselves delayering shortly after.

We weaved our way through undulating trees to the tune of happy conversation and laboured breathing which resulted in more experienced groups zooming past us. It wasn't long before we left the forest at the base of Dolomite Shoulder and our objective came into view far off into the distance; the famed watermelon waving to us from above the trees. As our first real objective this was pretty exciting to see.

Despite being avid hiker in the summer I was always left yearning for winter scenery with it's crisp pristine air, buttery pillows of snow, and unapologetically beautiful tones of blue. The main reason I love hiking in the spring.

Adding splitboarding to my repetoire was easily one of the better decisions I've made. The feeling of exploration as you break trail over untouched snow towards your destination is intoxicating to a fault. Against all odds, it flooded me with a far greater sense of liberation than I anticipated - surely a sign I'm due for some sort of existential crisis sooner rather than later. It wasn't long before we came across a shallow creek bubbling happily to the early sun beneath an expansive view of the aptly named "watermelon".

This was a great spot for soaking in the sun with a snack break. Although I didn't start doing this until later in the season, I discovered that breaking out the shovel and digging a quick bench to sit in (z-pads are a plus) while you eat is as satisfying as it is comfortable.

The puffed rice protein bar was insufficient to sate our hunger for adventure and we promptly resumed our journey towards the watermelon with excitement. Soon after we were met with a fork in the road. Continue left towards the orange rock band for some slightly steeper skiing, keep center and weave through a mini rock garden, or stay right and follow a mild incline towards the top. We chose to follow an established skin track on the right.

Coming up and around the one and only switchback of the day, I was reminded that some of the best views are often in the opposite direction of your objective. I was lucky to whip around in time to catch Allen skinning past a large snow drift with the Icefields Parkway in the background. The earlier cloud inversion that had draped over the valley was now retreating towards Lake Louise.

Around this time we noticed that we were experiencing our first temperature inversion. Despite a chilly -23C at the trailhead the thermometer on a passing skiier registered -5C. This phenomenon is often caused by denser cold air sinking to the valley bottom during overnight chills while air that retained it's warmth from the day before sits on top.

There be Sharks in these Waters

While preparing to drop in at the top of our second lap I was struck by a mild air of guilt as a fellow skiier chose his first line of the day. Moments ago I had just told him about our wonderfully fluffy first lap before witnessing an impressive display of acrobatic prowess as he hit a shark. Oops. He gracefully double-ejected and somersaulted into the air before finishing with an unsuccessful pancake stretch. Following his speedy recovery we made our way down the slope shortly after him and enjoyed an amazing second run.

We reached the bottom to the sound of cheers and jubilations as Alyson came sliding in. The temperature had started to drop as the earlier inversion retreated from the afternoon sun signifying the end of our day. During the return trip, Allen and I tempted the fates with our lackluster split-skiing ability and quickly learned the highbacks do not keep your legs anywhere near forward enough. Improving our telemarking abilities has been added to our skills agenda. We opted to head towards the gully for a speedier descent skating along previous tracks and enjoyed a late lunch before heading home. 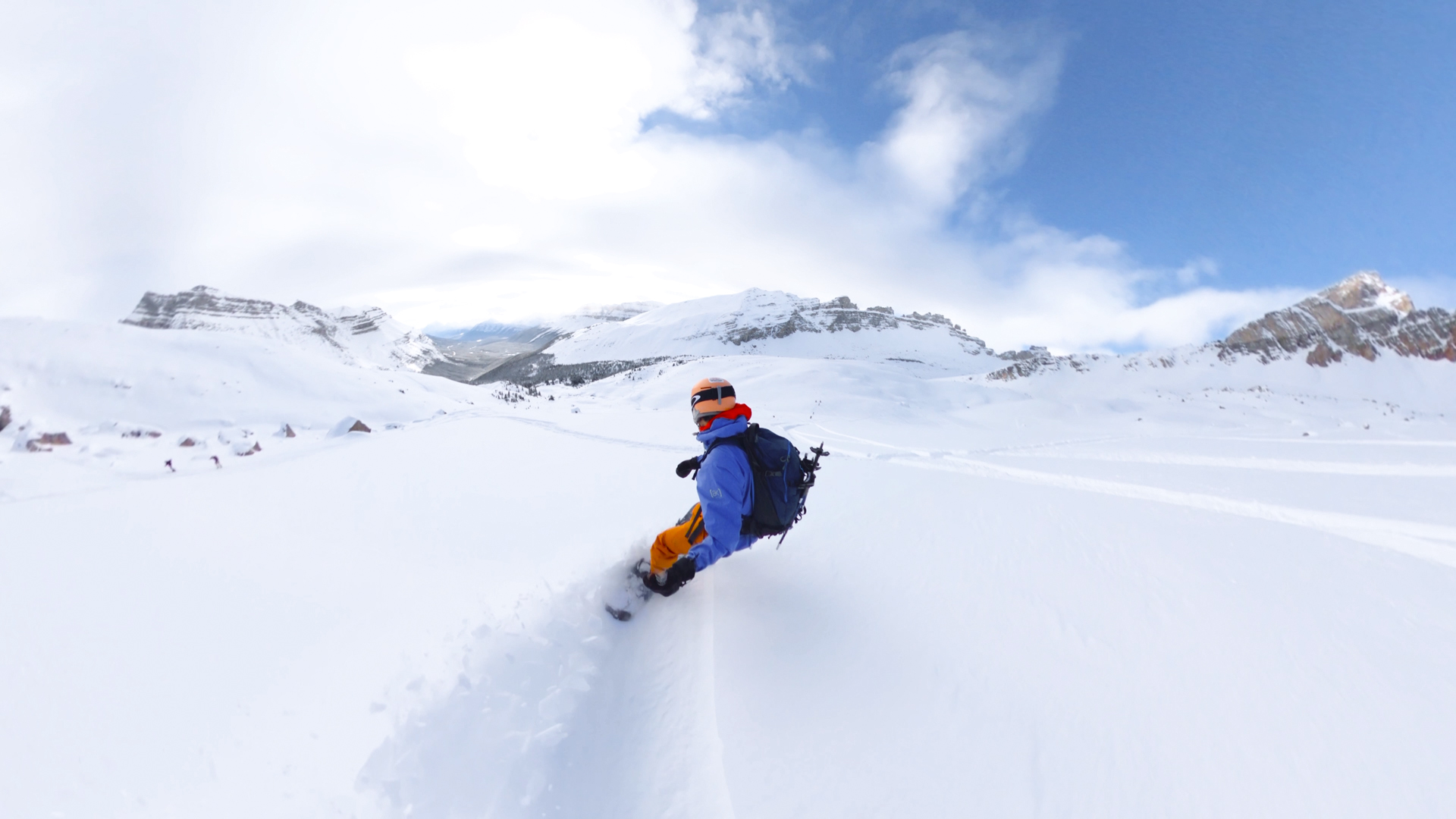 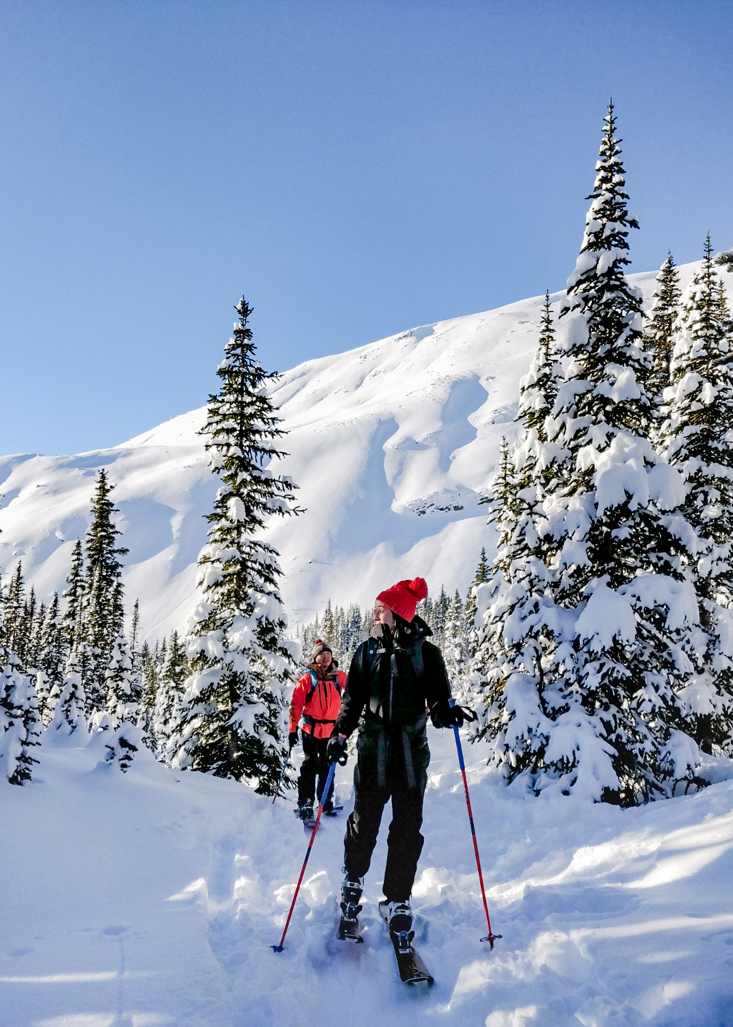 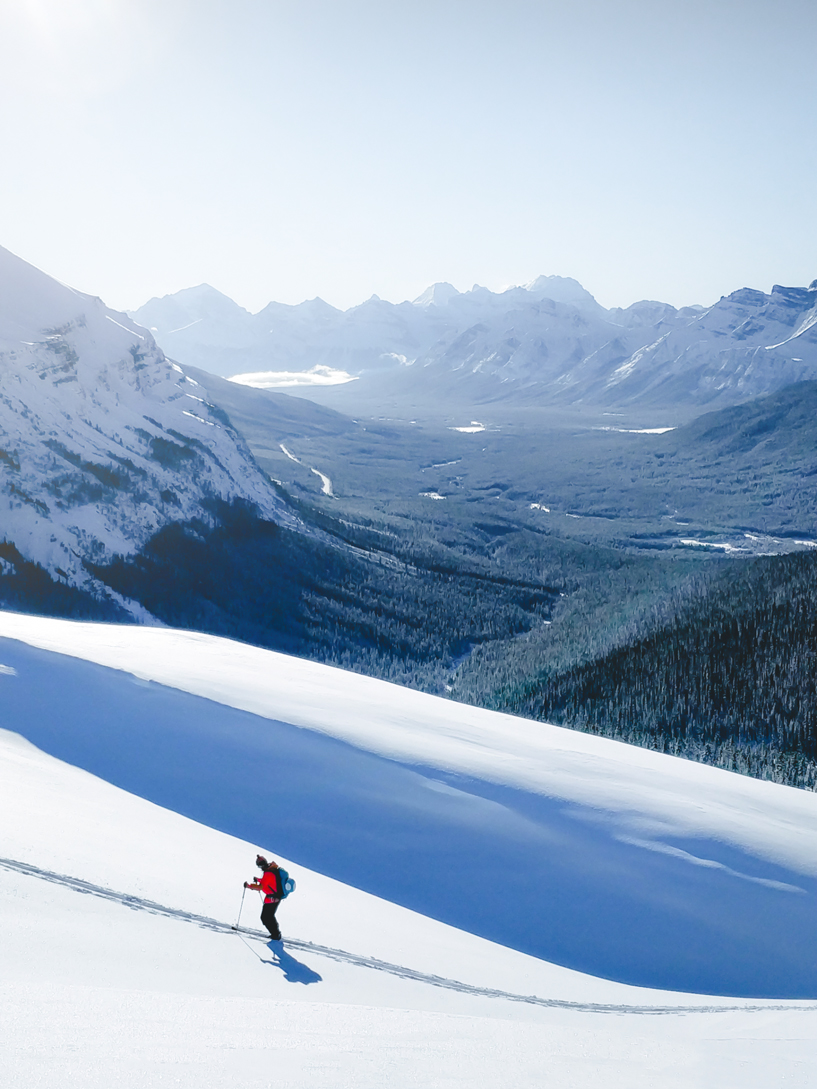 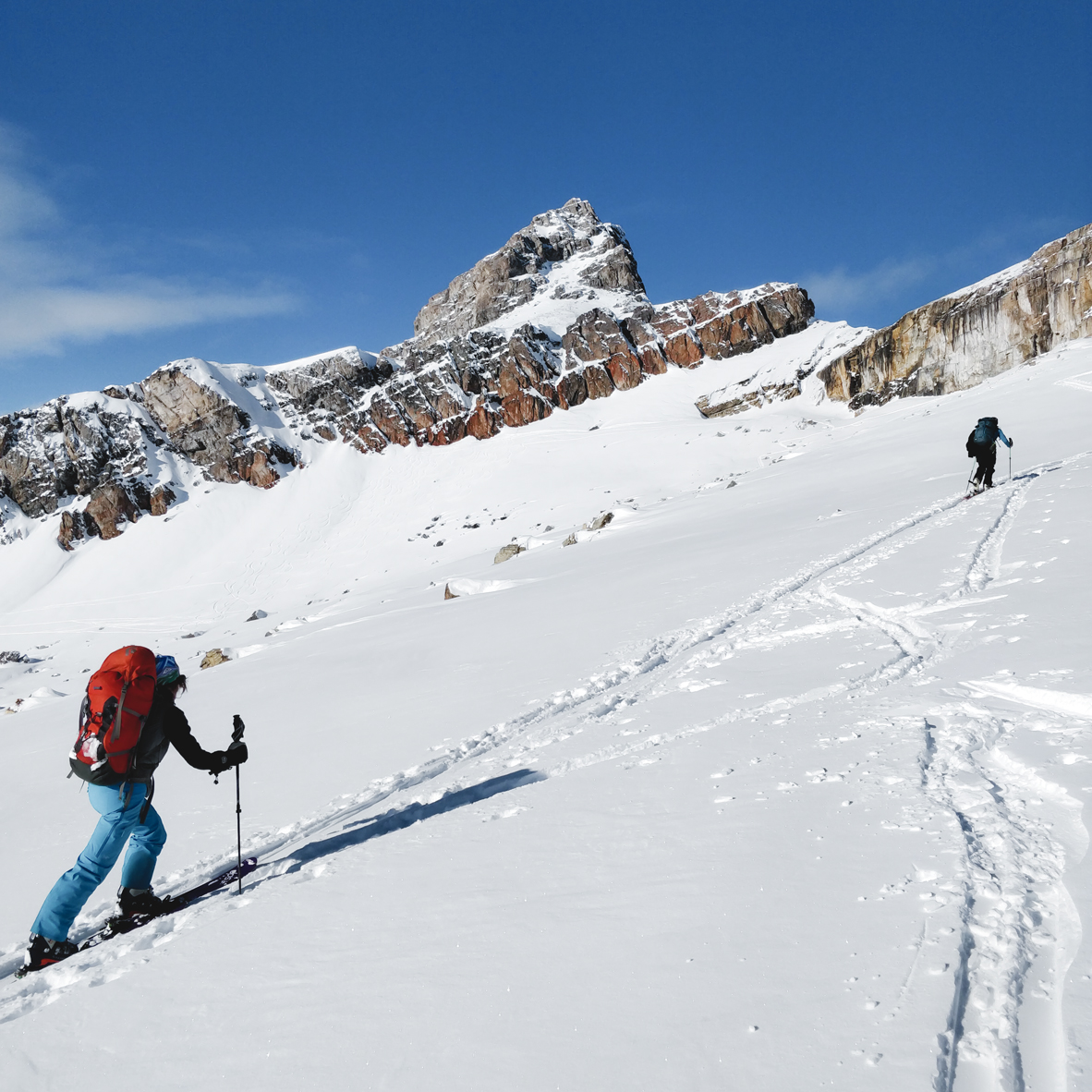 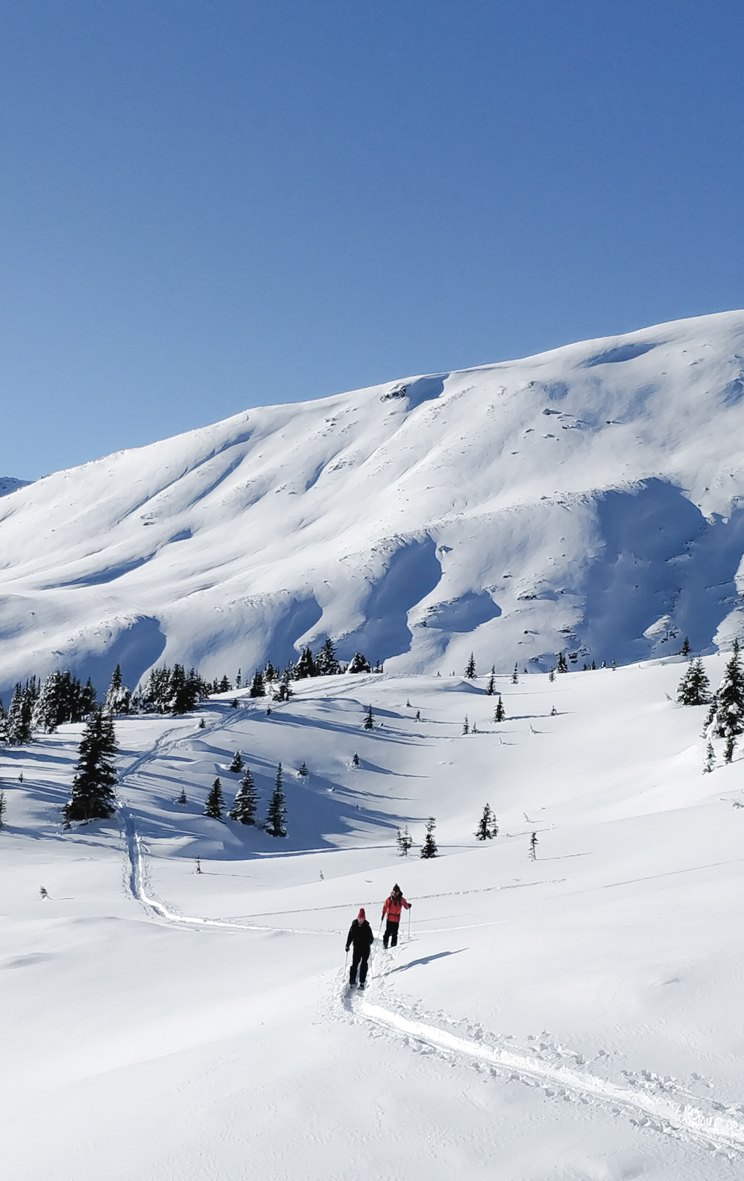 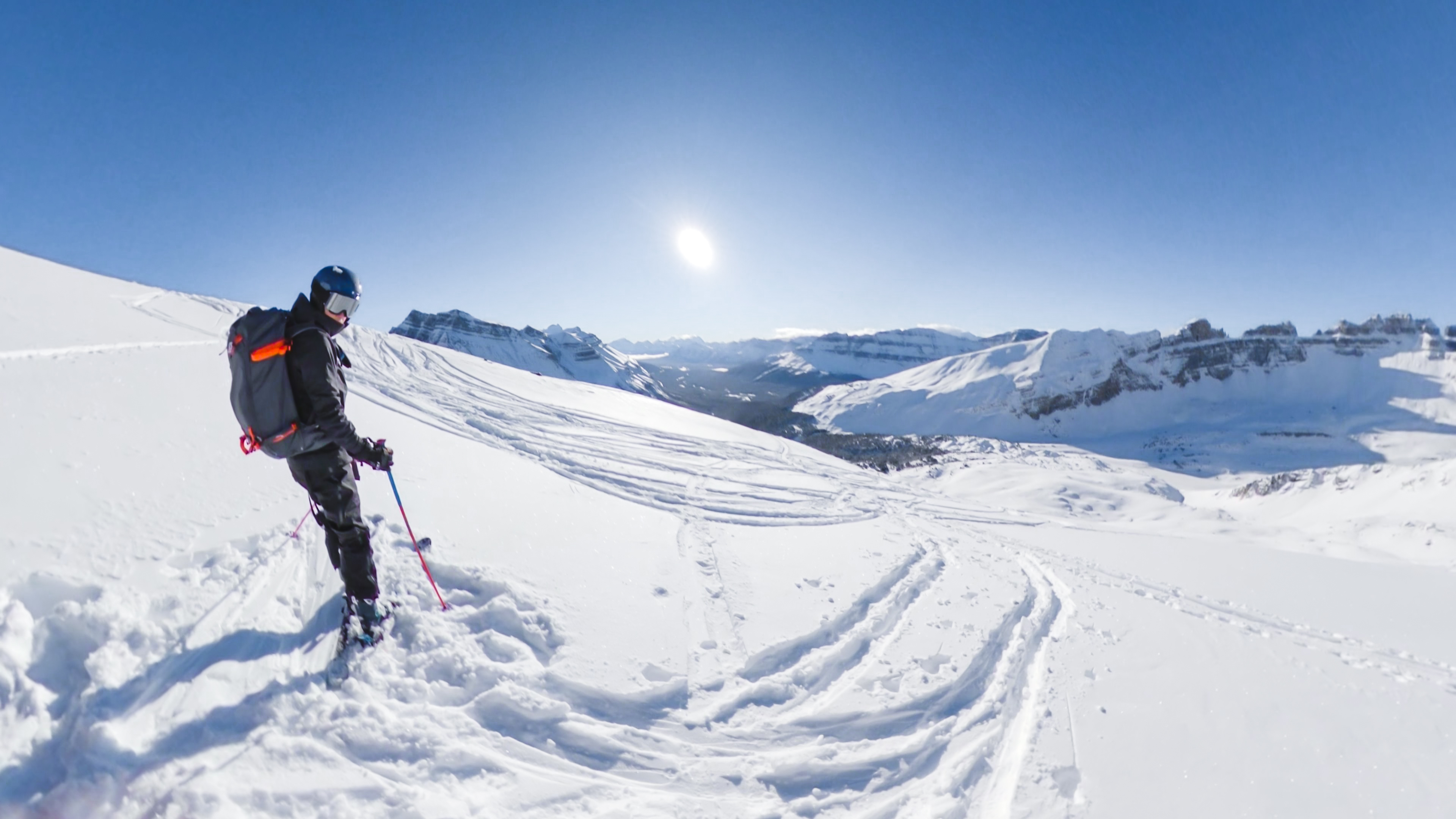